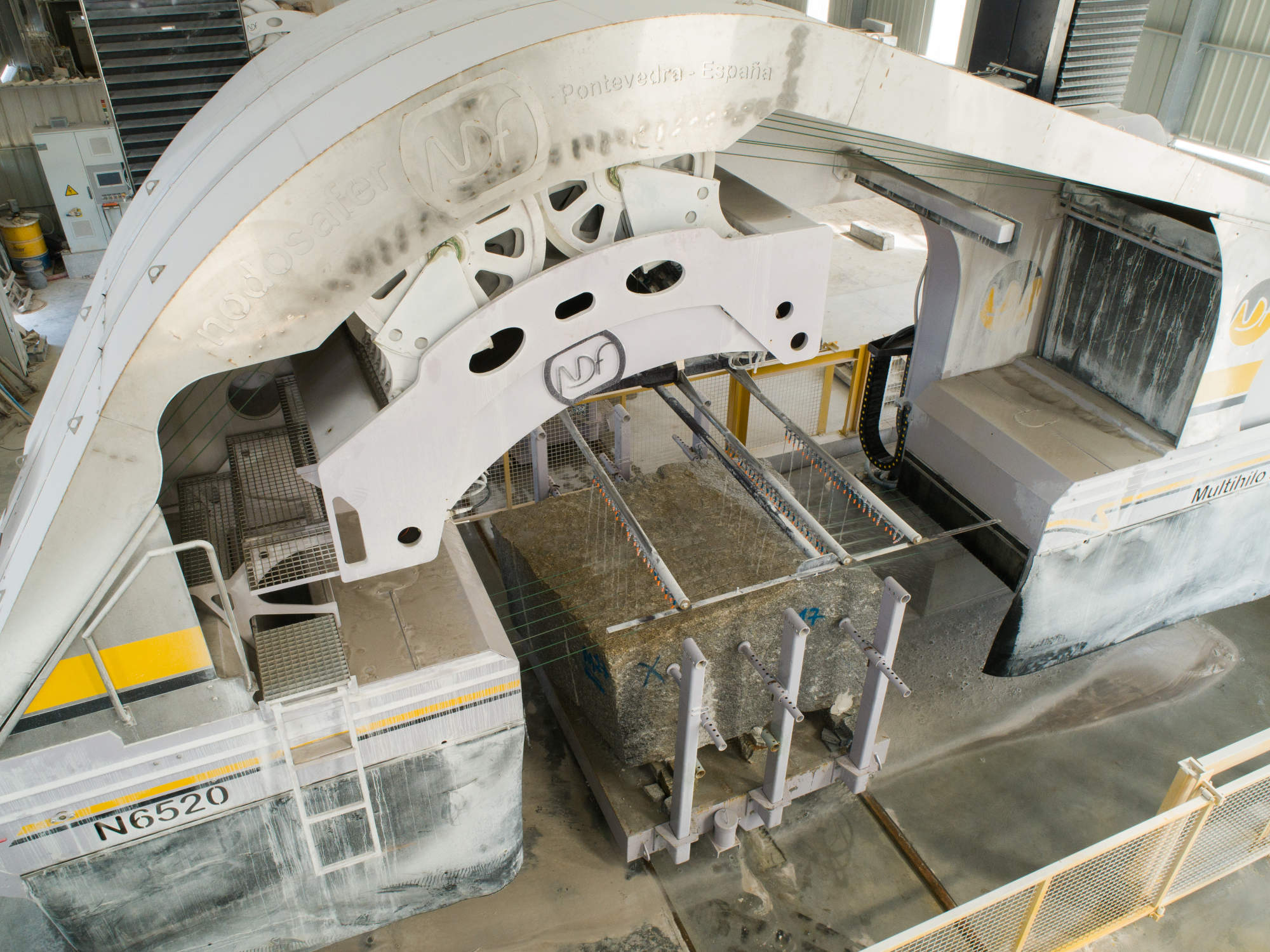 The new Diamond wire cutting machine N6520/20, is a multi-wire machine designed to produce boards and plates of varying thickness from the large blocks of granite and natural stone. This new unit represents the most modern technology in what refers to the primary sawing of the stone blocks, becoming the alternative to the traditionally used sawing methods, since it improves the production capacity quantitatively, efficiently taking advantage of the energy resources needed to the production of materials and significantly reducing the production costs of the cutting phase.

The main structure of the machine is basically composed of two sturdy columns formed by two steel-welded steel structures, connected between them by an upper crossbar. On both columns the structure of the main frame that joins the two trolley-carriages is mounted, which move vertically supported on both columns on linear guides with linear roller recirculation skates and actuated by a pair of spindles rolled with recirculating nuts balls, synchronized and operated by two motor-reducers with independent servo motors for the ascent / descent of the threads with a smooth and precise movement, located in the upper part of both columns, the entire guide assembly is perfectly protected by PVC bellows . The servomotors are synchronized by software in the vertical movements that ensure smooth cutting, low consumption, and maximum precision and avoid the slacks and problems of the central motorization with transmission and forwarding.

The multiple diamond wire cutter is a multi-wire cutter designed to produce slabs, boards and slabs of varying thickness from the large blocks of granite and natural stone. Traditionally in the factories of transformation of the granite, the cut of blocks is being made of the size of the same with looms when the blocks are of big dimensions, or with bridge cutters of big diamond discs in the workshops of stonework when cutting semi-blocks.

The biggest aspect to note is that the multi-wire cutter, for an equivalent capacity, the effective energy consumption, is lower compared to any of the methods used. This translates into significant energy savings both in the implementation, as in production costs.

This difference in the equivalent energy saving is mainly due to the difference in sawing technology, the multi-wire cutter only uses up to 76 loops of diamond wire and water during this process by cutting continuously. These diamond wires are basically formed by a steel cable covered by diamond rings along the cable, the cutting effect on the stone block to obtain the slabs and boards is produced by the effect of the continuous drag movement of the wires at a linear speed of about 35 meters / sg. combined with the rotation of the rings, producing a very high cutting power, differentiated effect with respect to the large traditional looms where the cutting process can be defined as the effect of a reciprocating saw, formed by a frame that houses about 100-130 steel strips in contact with the stone blocks at the same time moving c in combination with the rain of abrasive mixture of water, steel shot and lime, which produces the same amount of incisions in the stone block that amount of strapping.

The Multiple Diamond Wire Cutter is the alternative to the primary sawing methods currently used, improving the production capacity quantitatively, efficiently taking advantage of the energy resources necessary for the production of materials and significantly reducing waste produced during the cutting phase.

Comparatively, the advantages of using this new technology applied to the multi-wire cutter are obvious. The multi-wire cutter can cut any type of stone material in front of looms that only cut granites or marble, but these are two different models and that use different tools, the looms are only profitable when cutting 2-3 cm sheets of thickness, but its biggest disadvantage is in the energy consumption and the very high production of solid waste, since the water used is recovered in all cases, this waste apart from assuming a higher purification cost, presents a problem of environmental pollution in case of the looms because it contains iron, and the lime that alters the acidity of the waters, in addition to the moment it is not possible to separate or recover at this stage of the process. There is an important difference compared to traditional cutters, which is based on the cutting height, with a disc we can cut 1.50 meters in front of the diamond wire that any commercial block can cut, apart from the great productive difference that exists.

The water treatment and purification process for this new process is therefore more economical and less complex.

It is also worth noting that the water needs, while being similar, with respect to the traditional loom, the diamond wire cutting practically cancels the need to wash the load after sawing, this being much less demanding and both the needs and Water losses during the cutting process are lower.

Another aspect to note is that the multi-wire cutter, for an equivalent capacity, the effective energy consumption, is lower compared to any of the methods used. This translates into significant energy savings both in the implementation, as in production costs.

With respect to consumables, say that in the multi-thread cutter there is only one; the diamond wire, small volume, easy storage and simple supply. The costs derived from storage, stock programming and handling, are also lower with respect to strapping, shot and lime, necessary for the traditional loom.

In reference to the costs of implementation, the simplicity and the consequent lower cost of civil works stand out in the first place, while in the loom the necessary work constitutes an indispensable part of it, in the multi-wire cutter, this becomes a mere support of it. In addition, in the case of renewal or replacement of the machine, the loom forces the new implantation to be exactly the same model as the previous one, while in the case of the multi-threaded cutter there is a high degree of possibilities of being able to make an adaptation of the existing civil works. In any important case, that is, the space occupied by the multiwire is less.

The simplicity of the multiwire is significantly greater, both in the installation, in the use and in the management, and in the maintenance, both mechanically and electrically. It is important to note that the multi-threaded N6520/20 cutter does not use the common solution for vertical movement consisting of a central motor with reducer, transmissions and angular advancement. This is replaced by two independent and electronically synchronized servomotors without coupling each other. This solution, in effect, eliminates the drawbacks of classical mechanical transmissions, the play and the possible breaks due to wear and fatigue, and also allows us greater flexibility in the movements to be performed. In this regard, it should be noted that the system is capable of operating at speeds of one millimeter per minute, at most almost one meter per minute, all without loss of power or precision in movements.

As a practical effect, the N6520/20 cutter is the fastest machine on the market able to perform a vertical ascent movement in case of contingency avoiding the unwanted signs of the diamond wire in the stone.

The surface of the final product serrated with the diamond wire, in addition to the fact that it does not need to be practically washed, much less the use of harmful acids or chemicals and dangerous handling, offers the important advantage that its surface state can be assimilated to a certain jaded In the event that the material must be subsequently polished, a certain reduction in the costs associated with the abrasives used in the polishing process and the consequent reduction in production times should be noted.

The high speed of the multiwire cutter will also allow new users of this technology to schedule production with a lower advance and greater flexibility than the loom, even allowing partially cutting a block and reserving the rest of it for another more appropriate time.

The flexibility of production is also given by the clearly lower staffing needs. The preparation of the saw in a thread cutter for a cut, consumes less than half the time and less than half of human resources than a traditional strapping loom.

The use of diamond wire in primary sawing work has been used in the sector for a few years, and said wire is applied on known machines, normally made up of two pulleys on which a wire is installed forming a closed loop with which cuts are made on the stone blocks.

In recent years, machines that use several diamond wires have begun to be used, which are mounted on multi-channel drums or made up of several pulleys, on which several wires are mounted in order to perform several cuts at the same time on the stone blocks, thus obtaining significant productions.

The machines used up to now have different technical problems when it comes to correctly tensioning and controlling the wire loops, as well as another more significant one that lies in the possibility of varying in a simple way the position of the pairs of wires with the object of obtaining different thicknesses or varying them in the production of boards.

Taking these disadvantages into account, cutter N6520/20 stands out for its simplicity in the individual tensioning device of the tensioning wheels and at the same time has simplified their separation to allow the variation of the working thicknesses on slabs and axes to be cut in a simple and easy way.

The machine has TWO (2) motorized block carriage fitted as standard. 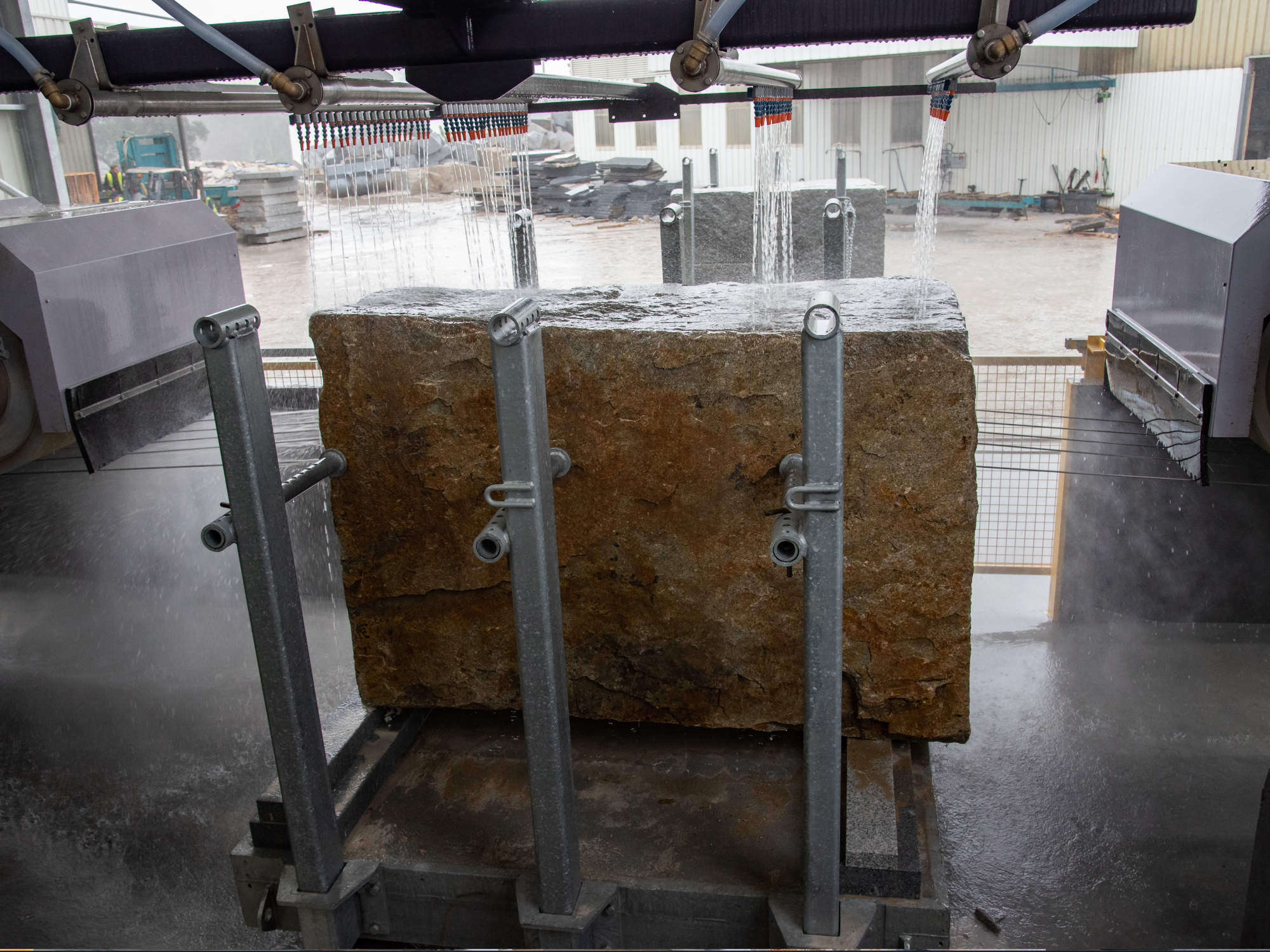 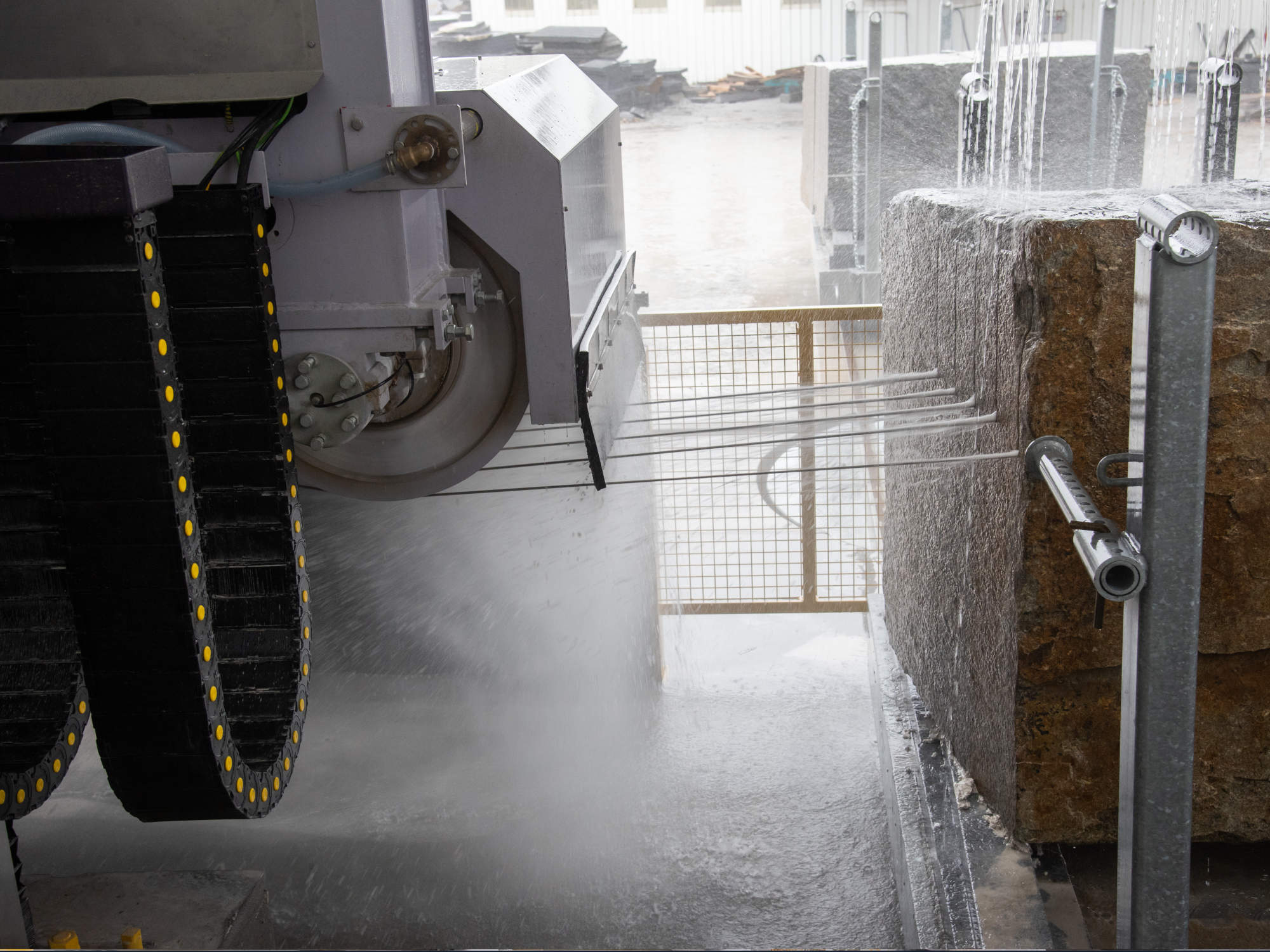 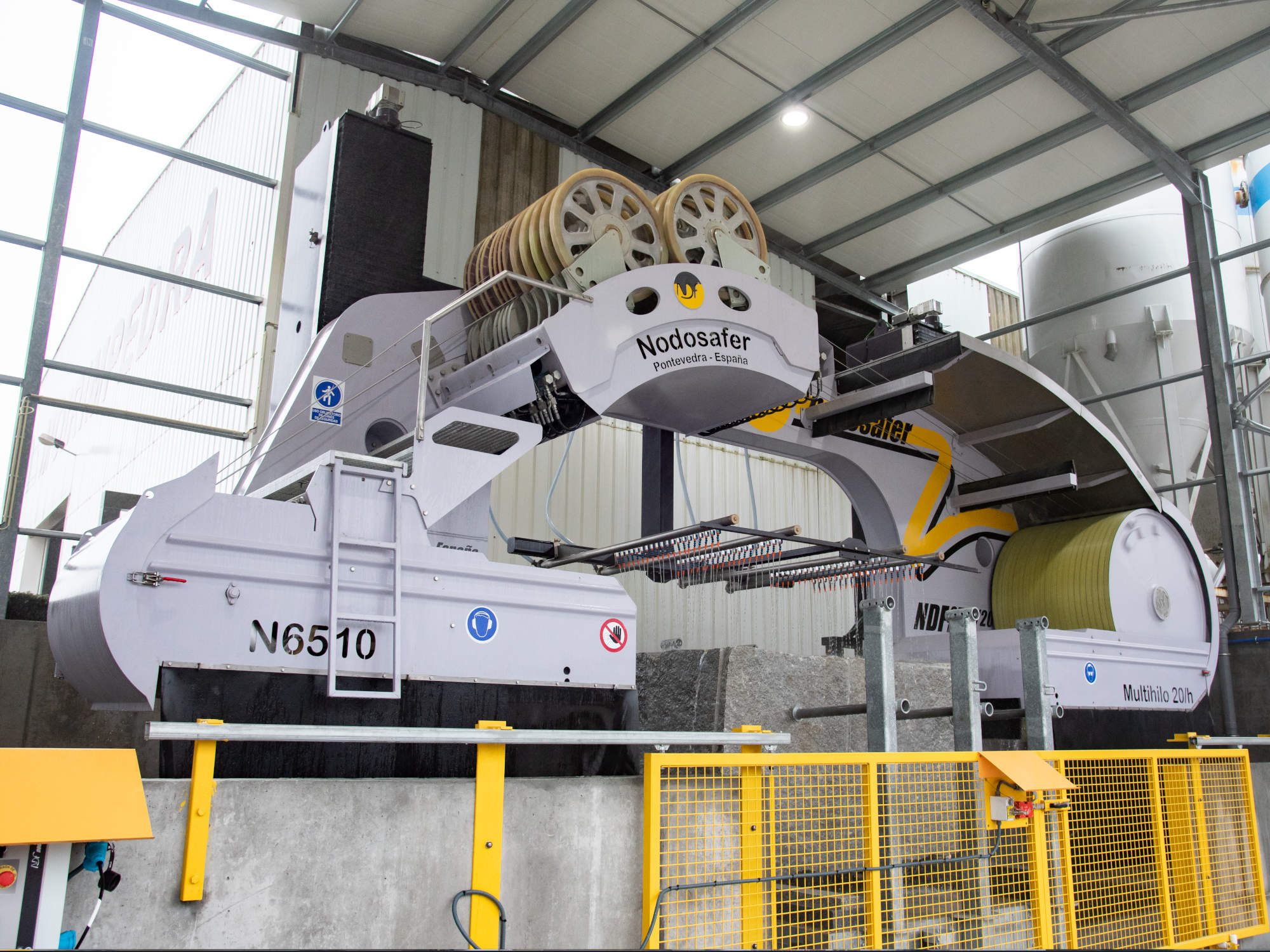 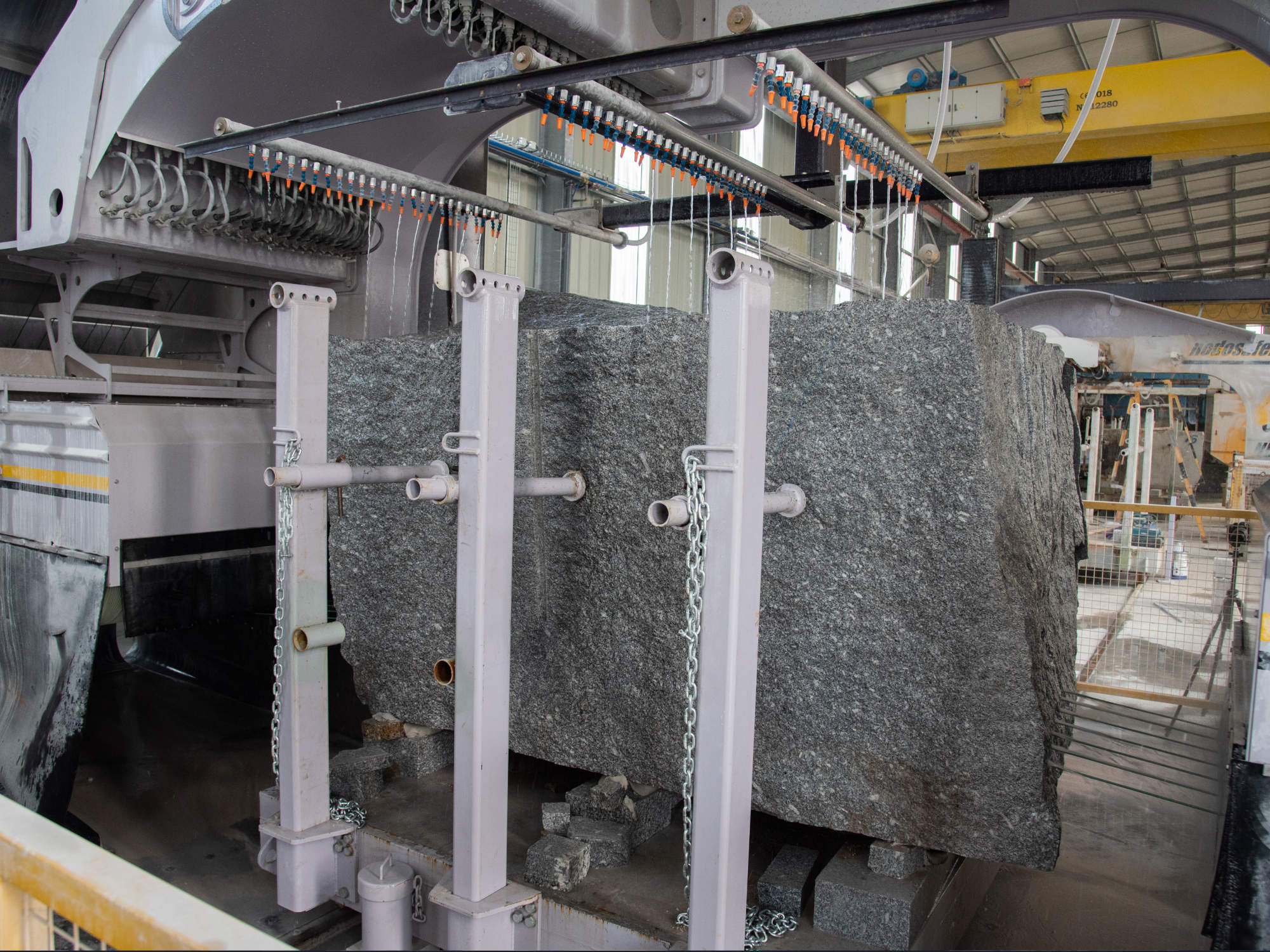 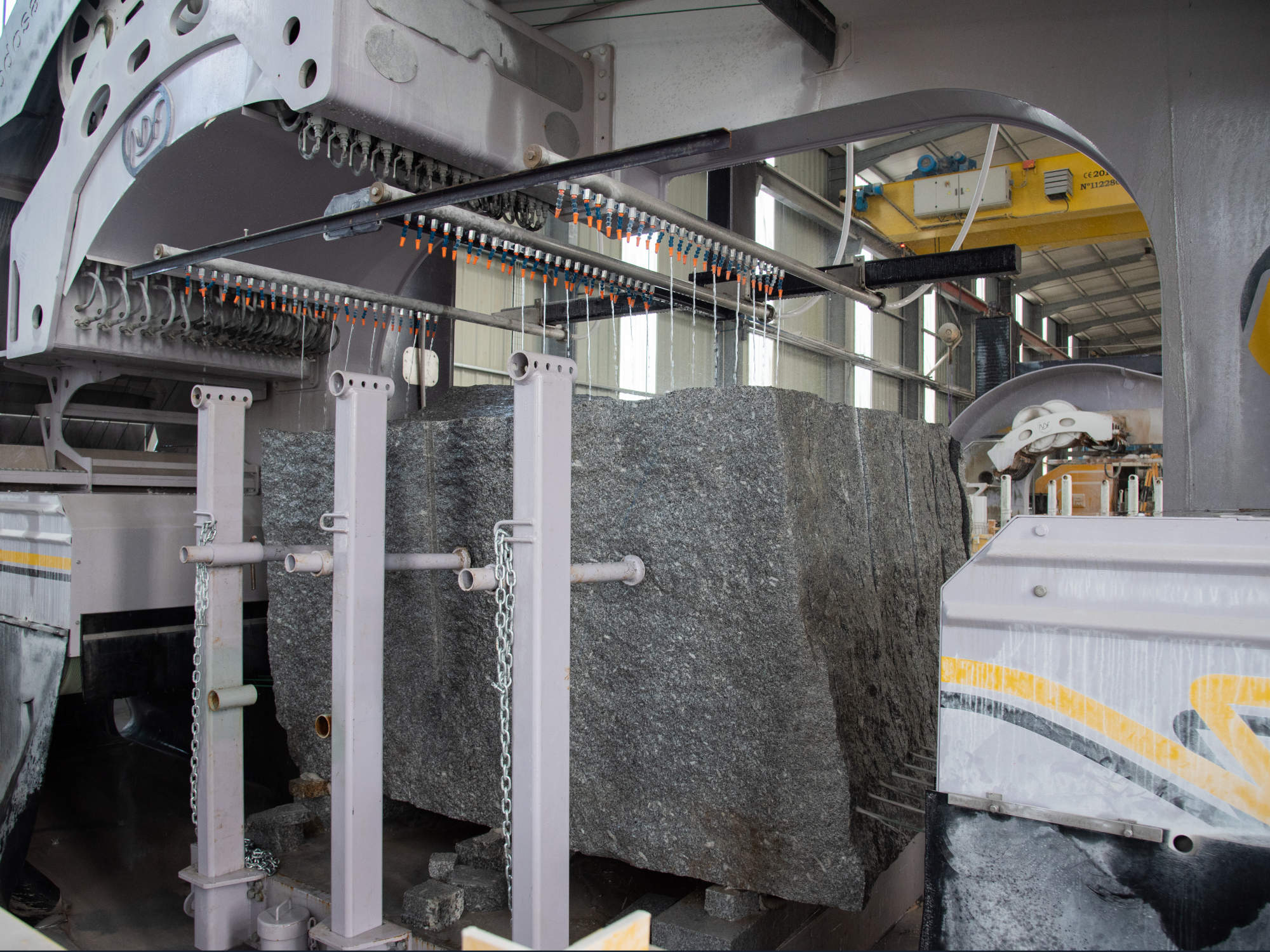 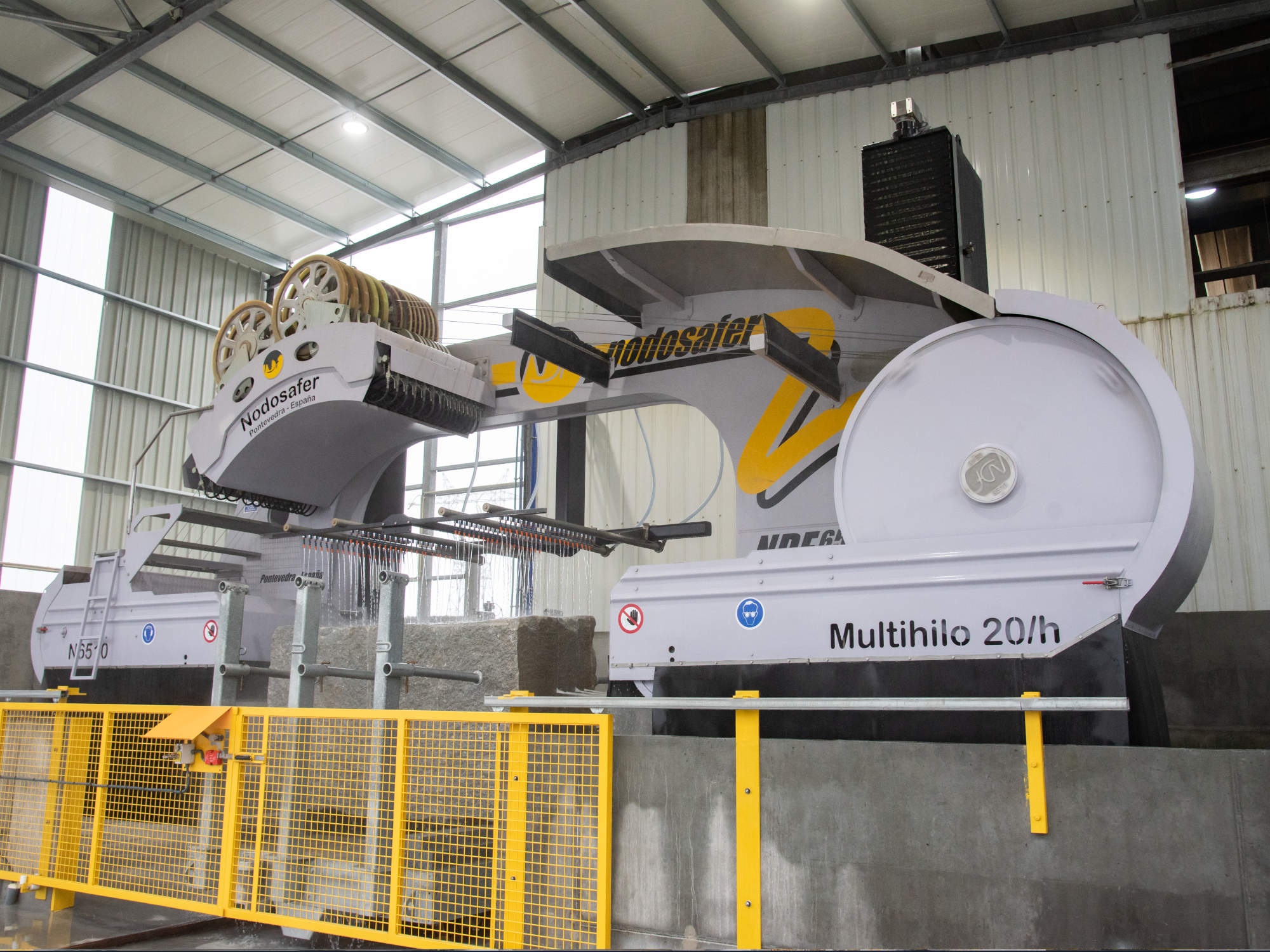 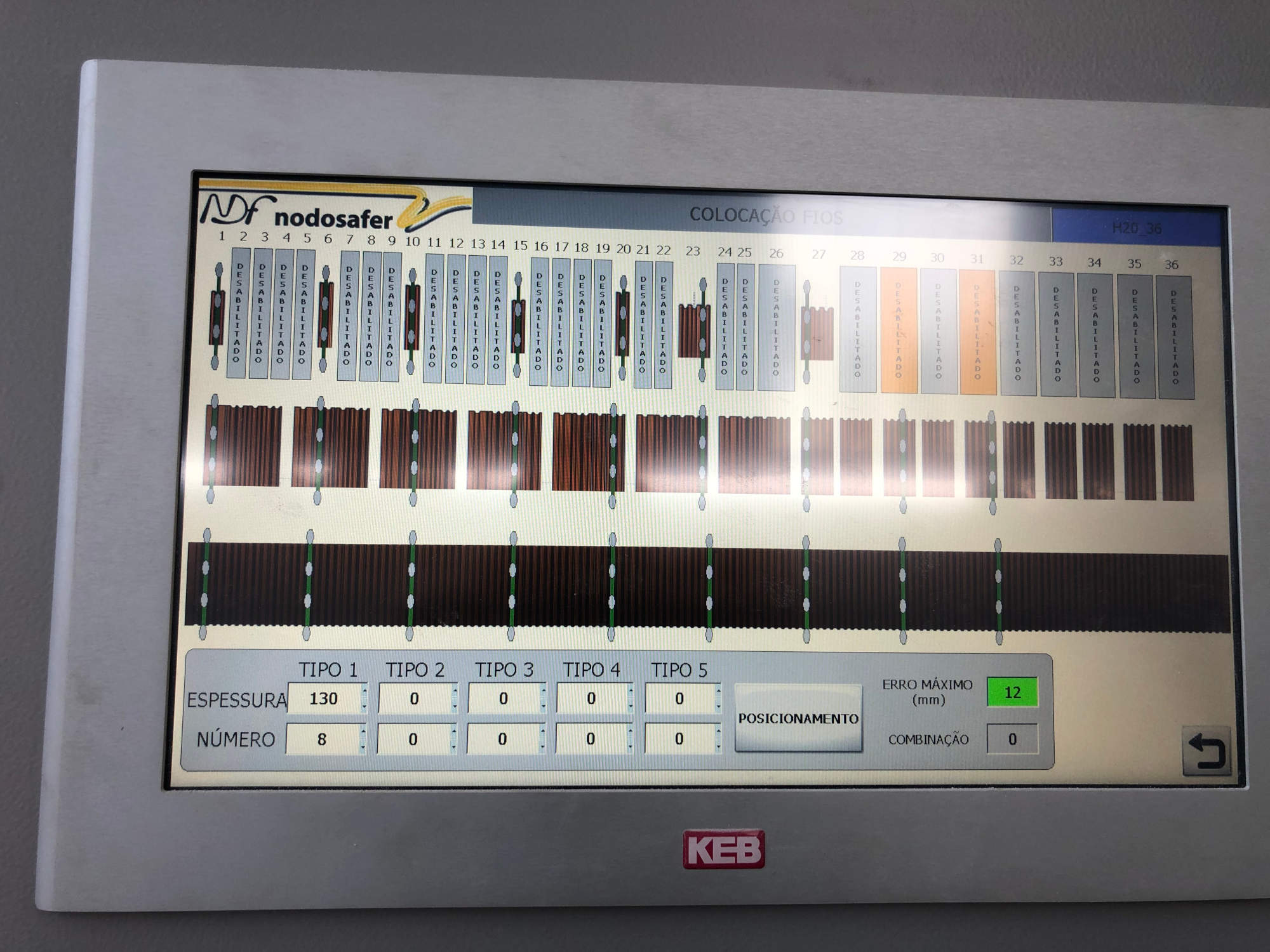 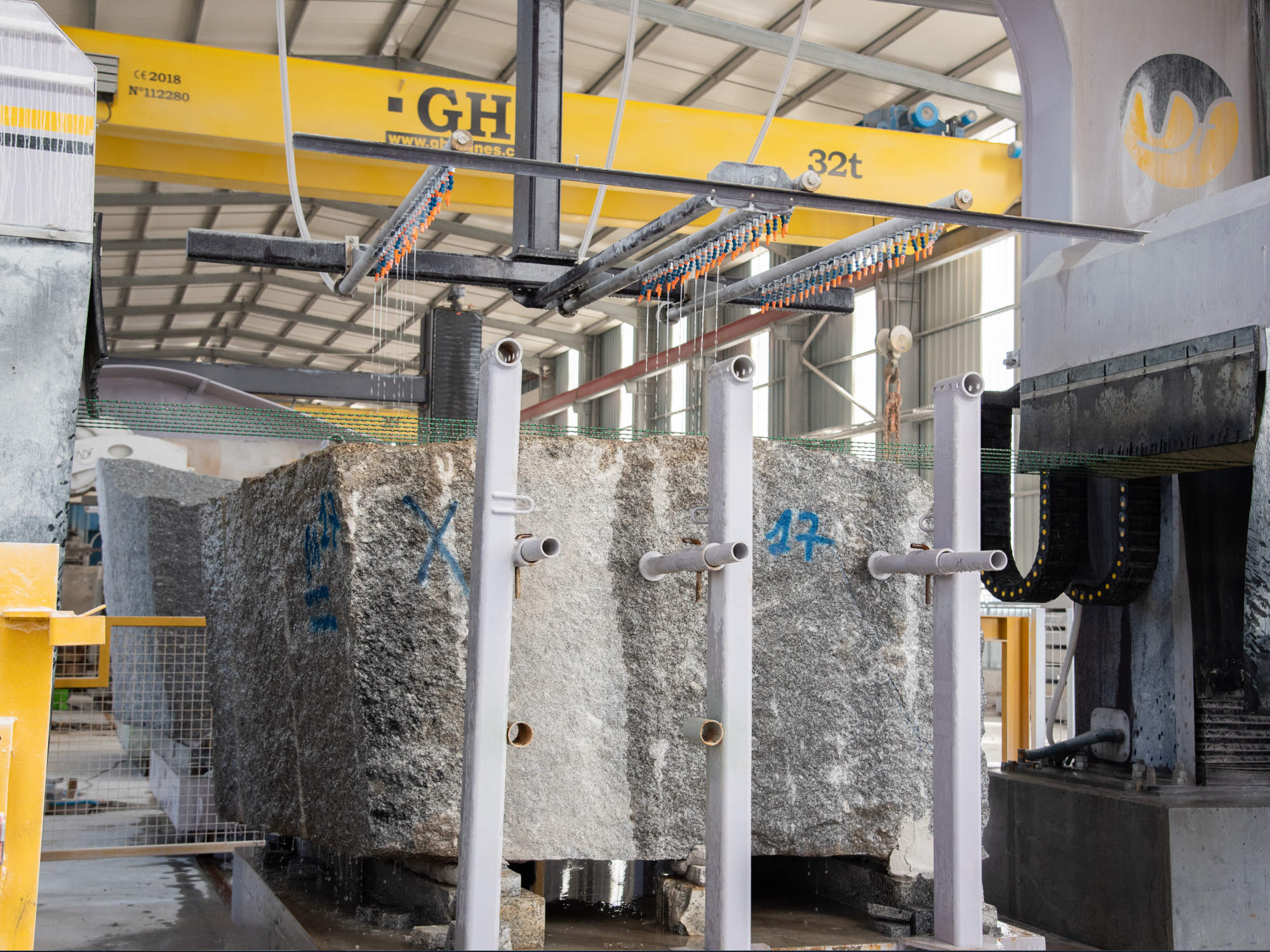 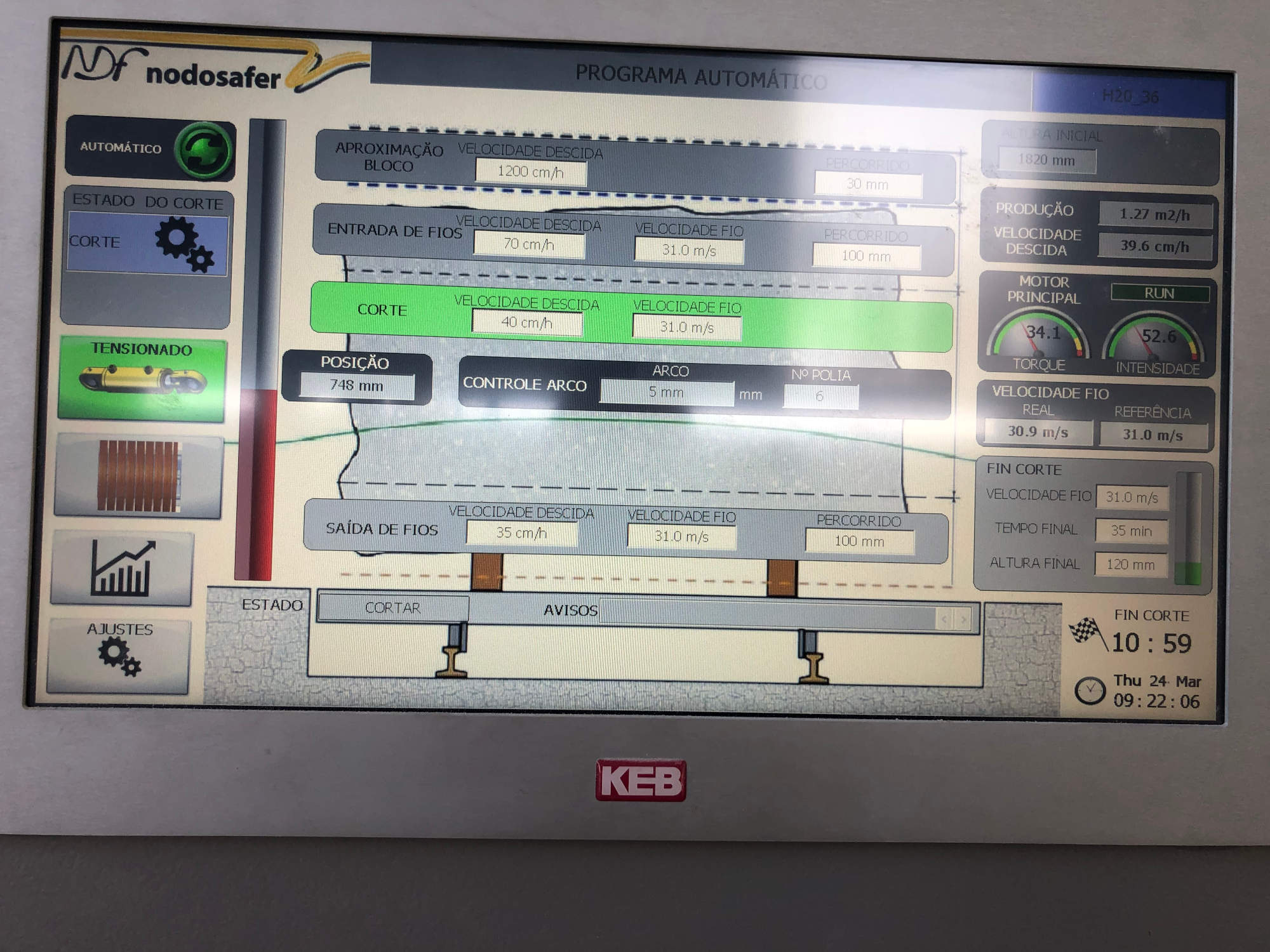 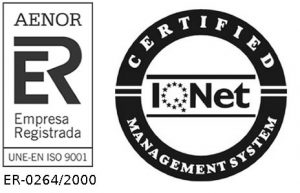