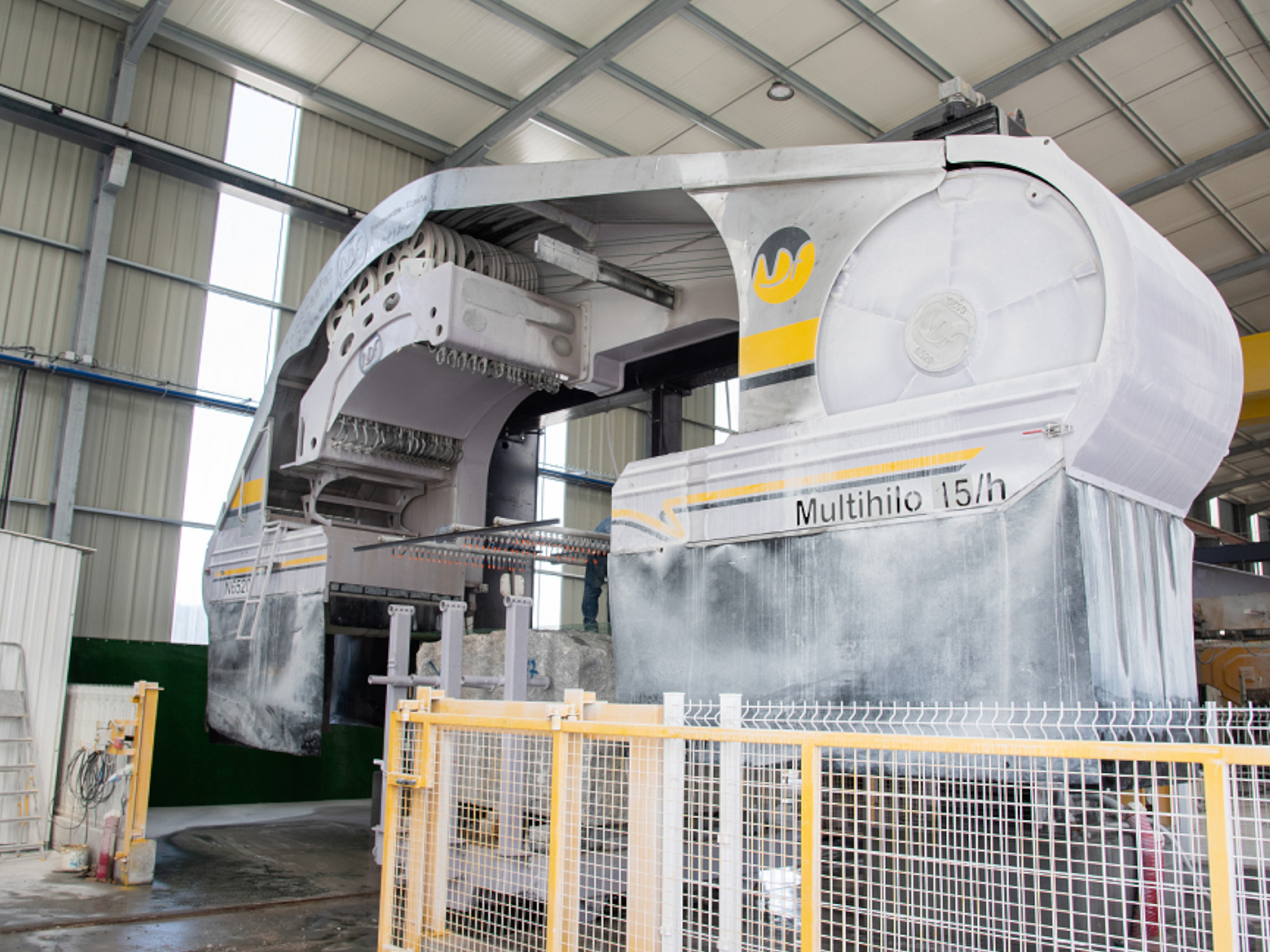 The NDF 6510/15 multiple diamond wire saw is a multi-wire machine designed to produce boards and plates of variable thickness from large blocks of granite and natural stone. This new unit represents the most modern technology regarding the primary sawing of stone blocks, becoming the alternative to the traditionally used sawing methods, since it improves the productive capacity quantitatively, efficiently taking advantage of the energy resources necessary to the production of materials and significantly reducing the production costs of the cutting phase.

The multiple diamond wire cutter is a machine that stands out for its efficiency and high productivity, designed to obtain high yields, characterized by its great robustness, thanks to its particular design that forms a compact, balanced and compensated set where all movements are concentrated.

The main structure of the machine is basically composed of two robust columns made up of mechanically-welded steel structures, connected to each other by an upper cross member. On both columns, the structure of the main flywheel carrier frame is mounted, which moves vertically supported on both columns on linear guides with linear roller recirculation skids and driven by a pair of rolled spindles with ball recirculation nut, synchronized and driven by two motor-reducers with independent servomotors for raising / lowering the wires with a smooth and precise movement, located at the top of both columns, the entire guide assembly is perfectly protected by PVC bellows. The servomotors are synchronized by software in the vertical movements that ensure smooth cutting, low consumption, and maximum precision and avoid backlash and problems of the central motorization with transmission and transmission.

The Ø1800 driving drum is made up of a single multi-channel pulley with 10 mm pitch grooves, and connected to the main motor by means of a pulley and toothed belt transmission. The threads are positioned manually depending on the desired thickness supported on one side of the machine on the driving drum, and in turn are tensioned from the opposite end by autonomous pulleys. The diamond wires are also guided by two small multi-channel drums that help to significantly reduce the sag produced by them.

From the end opposite the drive drum, the diamond wires rest on the set of idler pulleys, designed with a particular pivoting extraction system, which allows maintenance times to be significantly reduced.

The entire machine is characterized by the robustness and reliability of the elements that make up, being all of it designed to withstand the toughest working conditions, and in this aspect it is precisely where we can contribute all the experience accumulated throughout the years that we have been designing and manufacturing machinery for this sector.

The use of diamond wire in primary sawing work has been used in the sector for a few years, and said wire is applied on known machines, normally made up of two pulleys on which a wire is installed forming a closed loop with which cuts are made on the stone blocks.
In recent years, machines that use several diamond wires have begun to be used, which are mounted on multi-channel drums or made up of several pulleys, on which several wires are mounted in order to perform several cuts at the same time on the stone blocks, thus obtaining significant productions.

The machines used up to now have different technical problems when it comes to correctly tensioning and controlling the wire loops, as well as another more significant one that lies in the possibility of varying in a simple way the position of the pairs of wires with the object of obtaining different thicknesses or varying them in the production of boards.
Taking these disadvantages into consideration, the N.6510 / 15 cutter stands out for its simplicity in the individual tensioning device of the tensioning hand wheels, and at the same time it has simplified their separation in order to allow the variation of processing thicknesses in the slabs and boards to cut simply and easily. 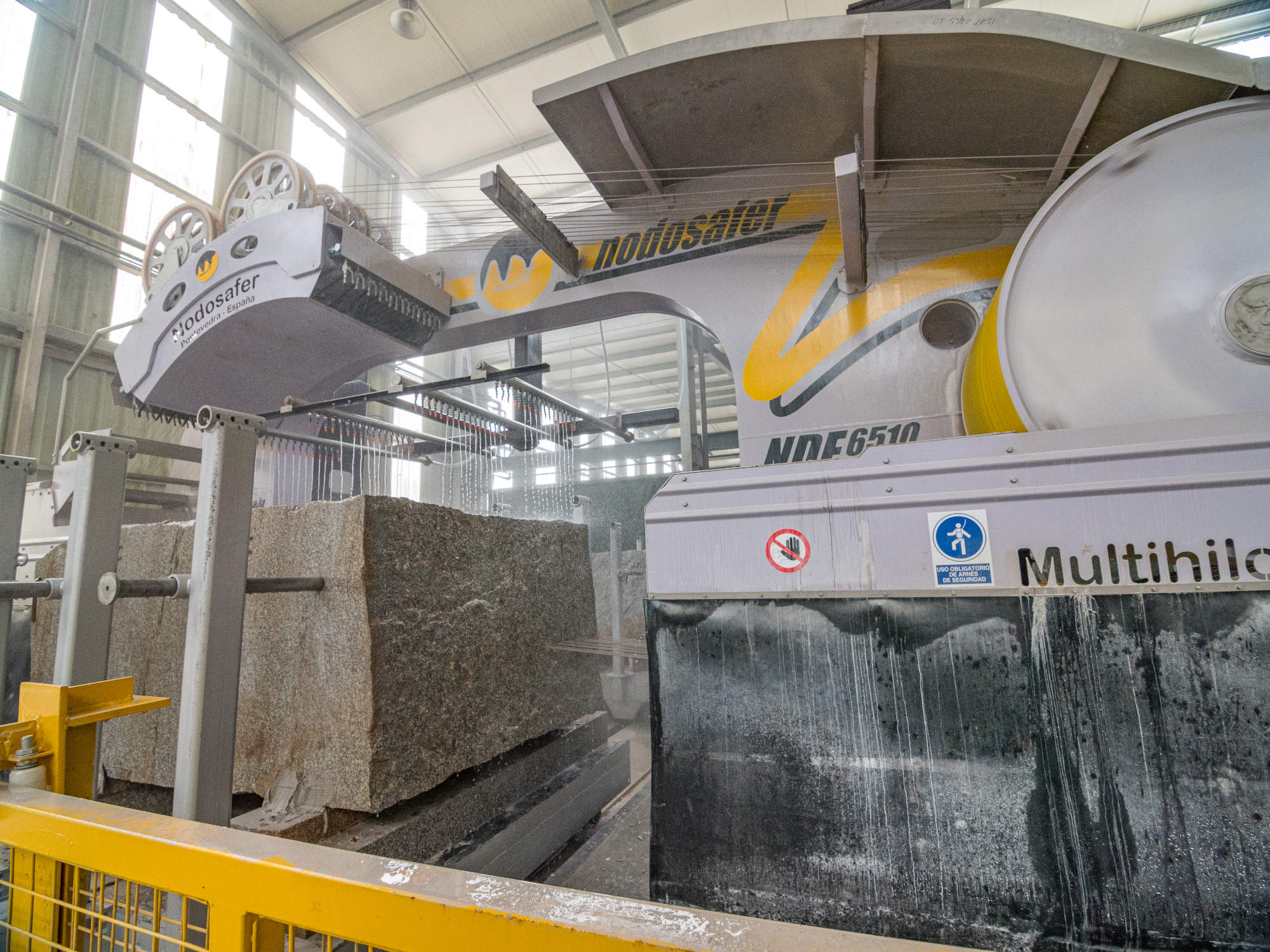 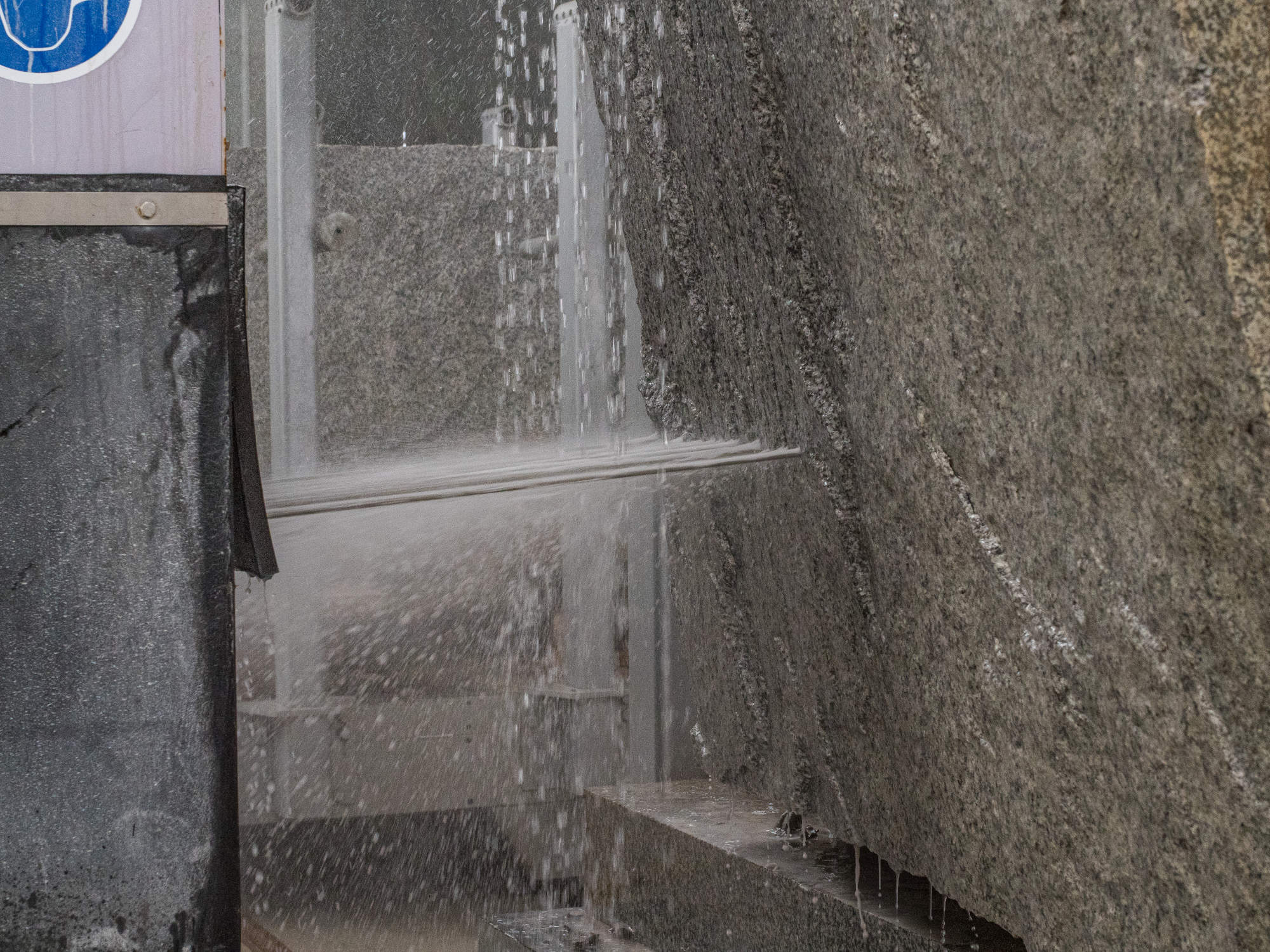 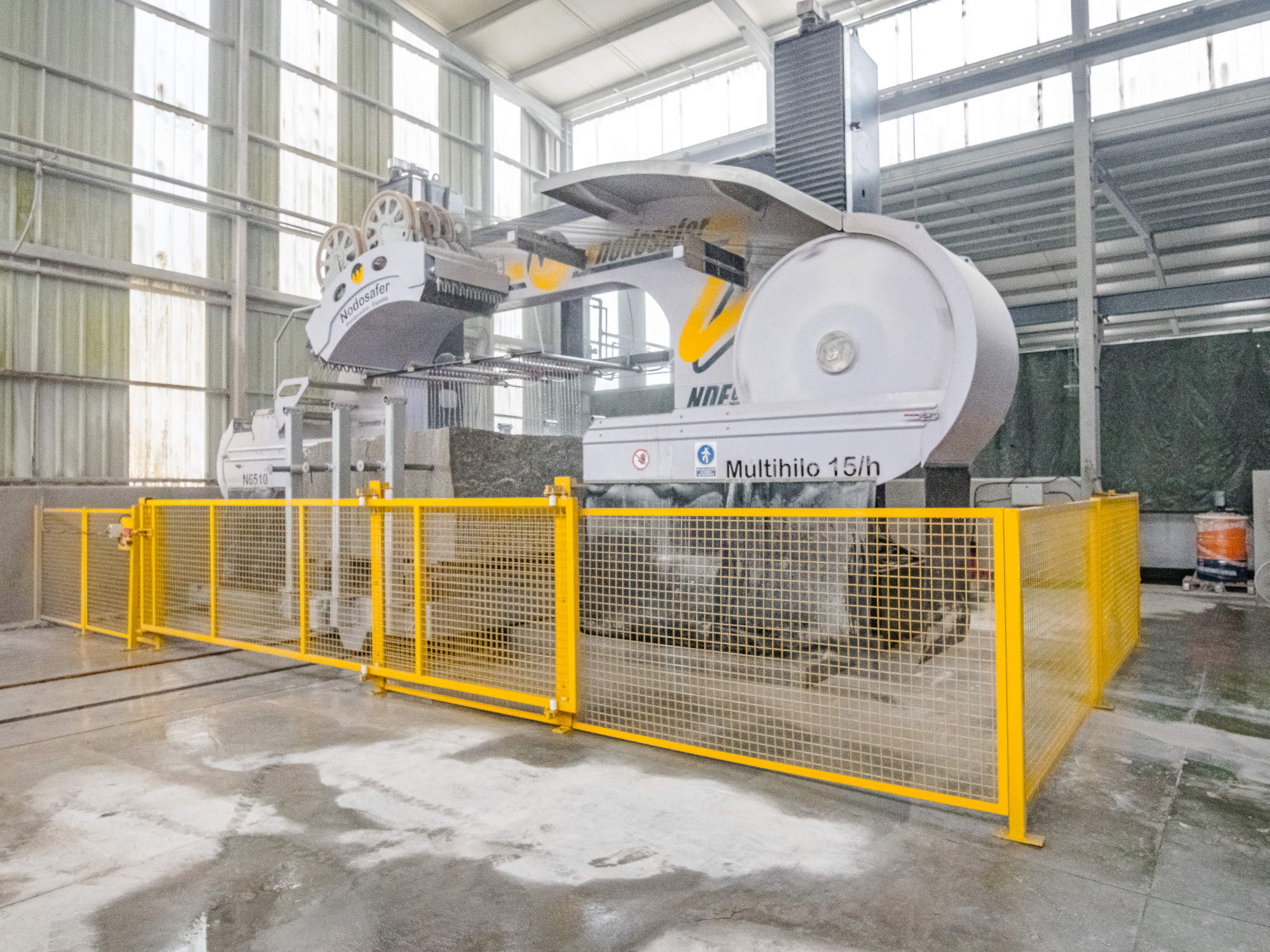 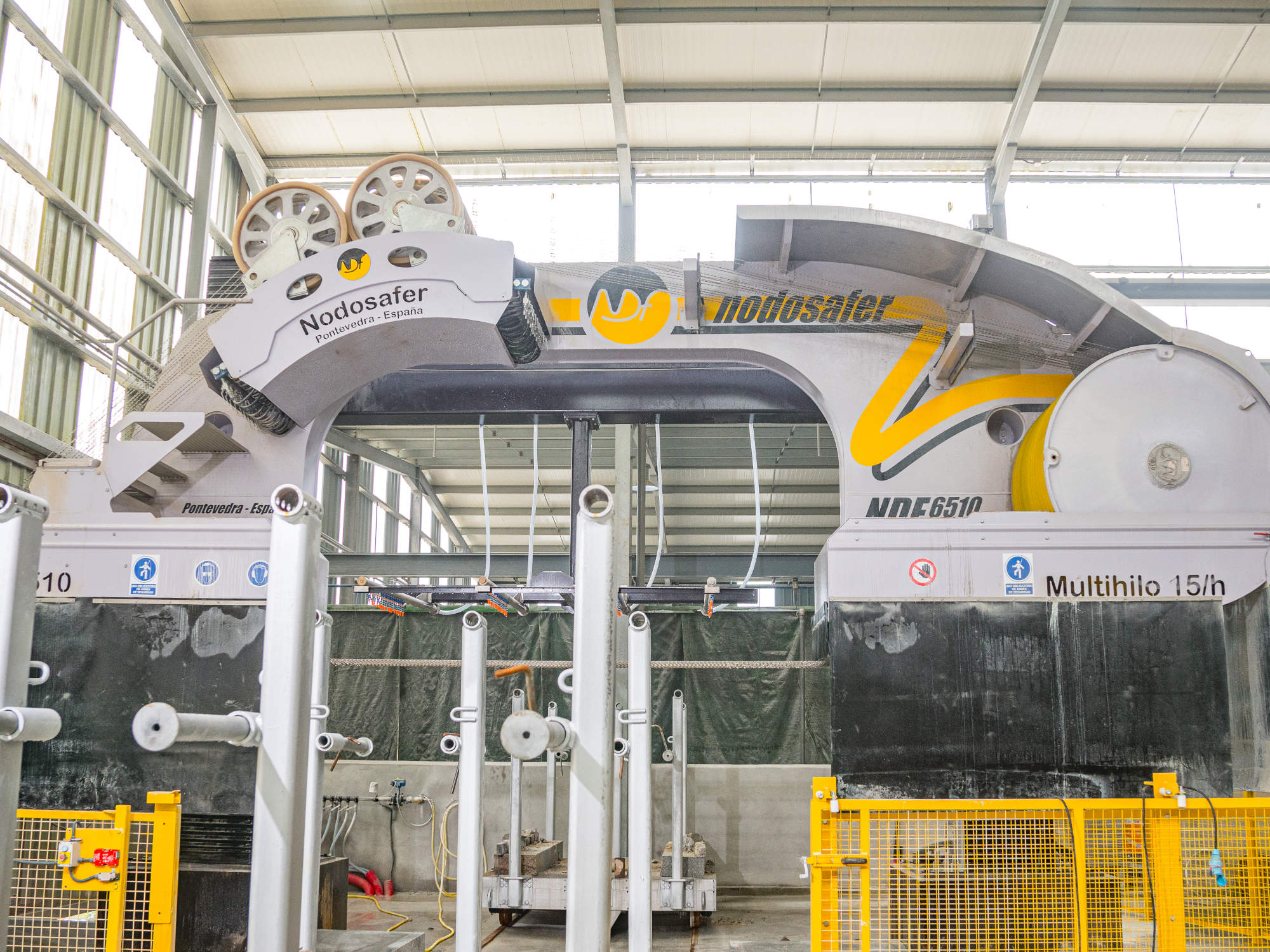 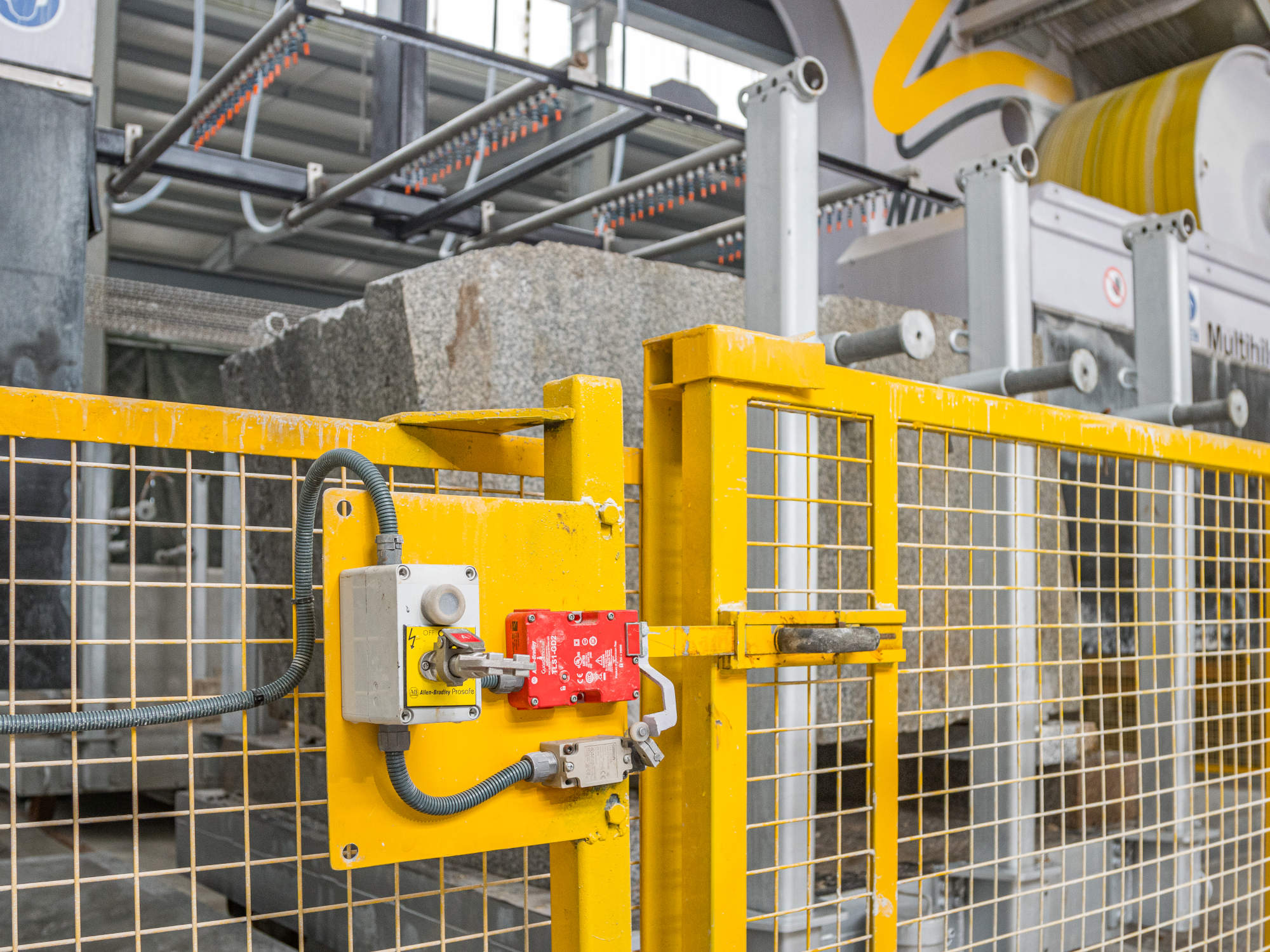 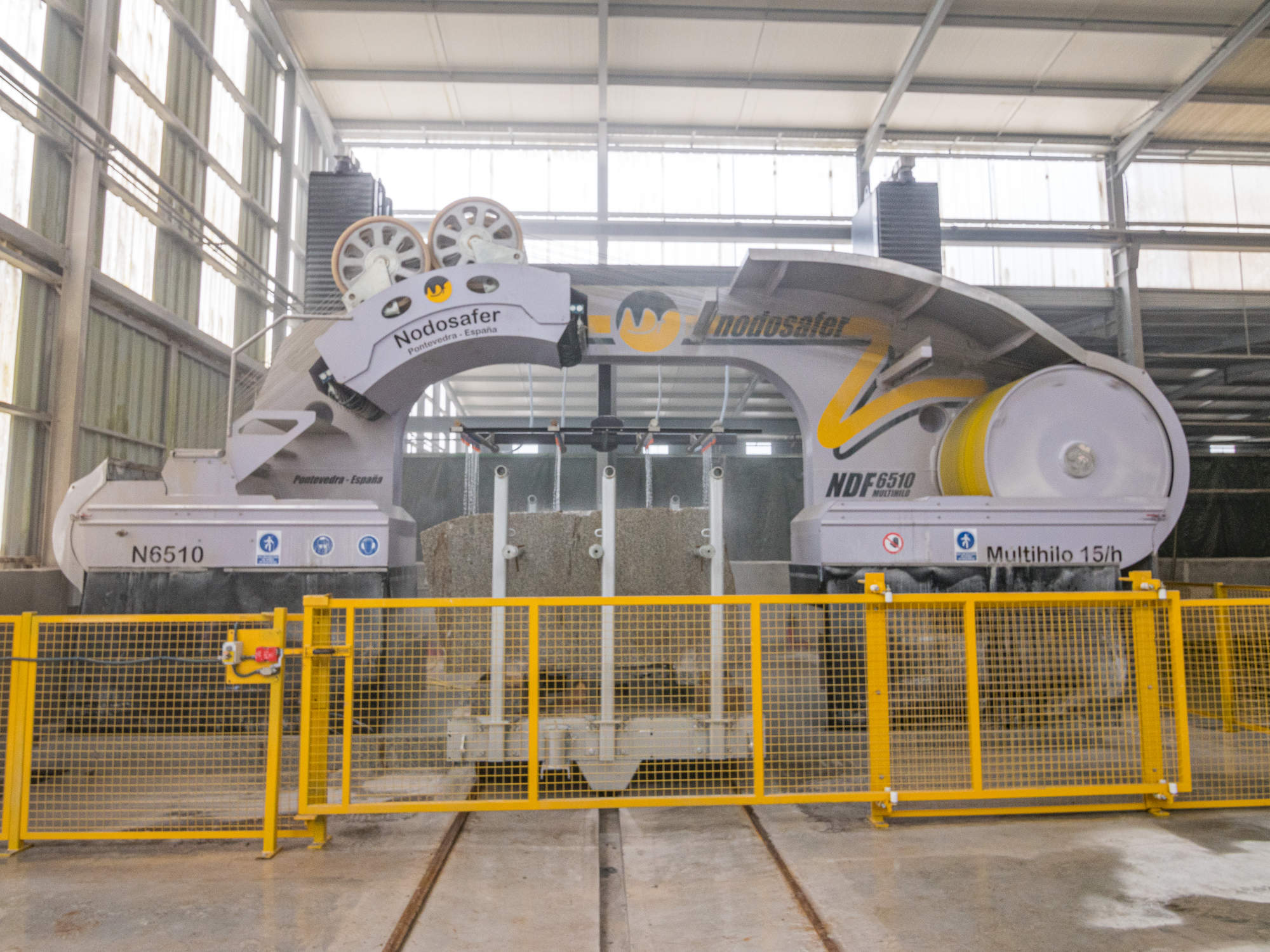